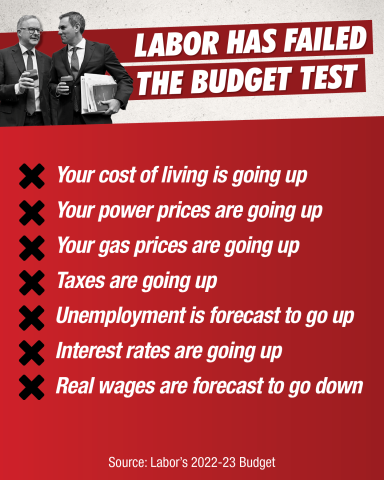 Last week, Peter Dutton, Leader of the Opposition, delivered his Budget-in-Reply speech stating the test for the Government was to build on the strong position inherited from the Coalition to address the cost-of-living crisis bearing down Australians.

Labor has failed this test.

This budget does nothing to assist your family budget.

This budget fails families in Mitchell at a time when they really need a plan to address cost of living pressures.

This budget confirms that for families in Mitchell:

It’s a high-taxing and high-spending budget that does nothing to help you or your family get ahead.

Just before the election, the Prime Minister told Australians that they “will be better off under a Labor government.”

In fact, by Christmas, the average Australian family will be at least $2,000 worse off.

The Coalition wants Australia to do well, but we are being hampered by a new government with no economic plan for the future.

Australians deserve better from a government that promised so much, but in its first economic test, has delivered very little.